Throughput is king. For many X-ray imaging applications, the resolution of the image is just as important as the speed at which the image is acquired. For inline applications especially, the entire line speed can be dictated by the speed at which an X-ray image is acquired. If you want to analyze the image, it’s relatively straightforward to allocate additional processing power to your analysis software, but how can you speed up the image acquisition itself? With traditional X-ray sources, you had two options: you can turn up the power and lose image resolution, or you could reduce the exposure time and reduce your contrast. Micro X-Ray has a third option: turn up the X-ray power, without losing image resolution.
There are a lot of rules dictating how X-ray tubes must be operated. These are generally dictated by the laws of physics, and we’re often pushing the bounds of what’s possible in order to take get better X-ray images in less time. Micro X-Ray’s unique technology allows you to take images with our Microbox in 33% less time than any other source on the market. In this series, we’re going to look at how Micro X-Ray can achieve this breakthrough result.
In Part 1 of this series, we’ll look at how an X-ray gets from the tube to the detector, and how source power plays a role in image acquisition time. In Part 2, we’ll connect the dots and learn how Micro X-Ray can deliver the highest resolution images in the market with record breaking exposure times.

Let’s start by following a single X-ray on its journey from generation through detection.
If we trace the path of an individual X-ray, it is generated at the tube and starts moving in a random direction. Let’s say, for argument’s sake, that the X-ray we’re following is pointed at the detector, passing through some object on the way, as shown below. 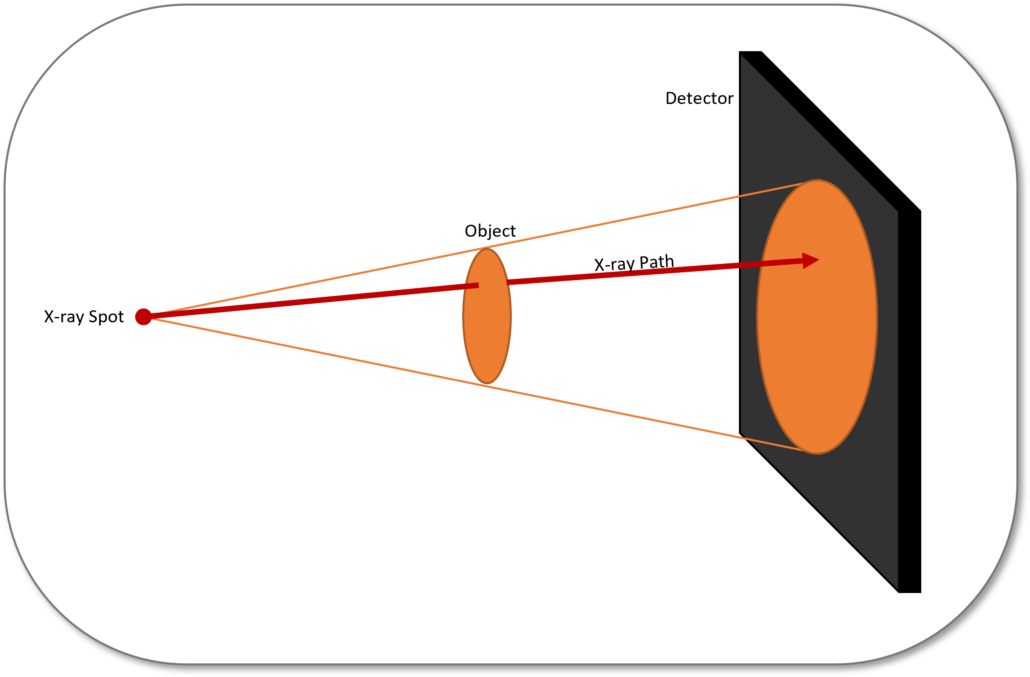 Path of an X-ray from generation inside the X-ray tube to the X-ray detector, through an object

The X-ray begins the journey towards the detector at the speed of light, and along the way the X-ray photon will pass through some sample being imaged. The sample material has some probability of being absorbed (or scattered off its path) in the material based on its density. If the X-ray is absorbed, then it does not make it to the detector. If the X-ray is not absorbed, then it registers as a single count on the pixel of the detector where it hits. Each pixel on the detector can count some finite number of X-ray photons before reaching its limit – maybe it’s an 8 bit detector (256 photons of resolution), or a 16 bit detector (65,536 photons of resolution). Once the counter for an individual pixel is full, that pixel can’t count any additional photons and reaches saturation.
One way to decide your exposure time for a given image is when the highest value of any individual pixel is close – but not quite reaching – the upper limit of what it can count. This will give you an image with the best possible contrast between densities in your image. Or, you may decide that you want contrast between two specific materials with relatively similar densities, and you don’t care about what else is happening in the image (say, you’re looking at bond wires on a die, but you don’t care about the plastic packaging material) – in this case you would allow the lower density plastic parts to saturate some pixels in your detector, and set your exposure time accordingly.
No matter your criteria, to get the contrast you need, you’re looking for a certain number of photons to hit certain pixels in your detector before your image can be considered complete.

To summarize the X-ray’s journey:
Let’s call all those probabilities combined ρ:

If our X-ray makes it through those combined probabilities, then it will hit the detector’s pixel and add one to the count. Remember our image completion condition (desired exposure) is based on the number of X-rays that hit the detector. So how do we do it faster? We need increase the input to that chain of probabilities. If we increase the number of electrons in the beam, the constant probabilities don’t change at all, so the effect is that more X-rays hit the detector.
Because these are all fixed probabilities for a given X-ray system, if we double the number of electrons in the beam, then we (roughly) halve the time required to reach the desired X-ray exposure. (Why roughly? Detector efficiency, noise, and other impacts will all play a factor here, but as a rule of thumb, if you double the power, you halve the required exposure time.)

In this post, we’ve walked through the path a single X-ray takes in it’s journey from tube to detector. We now know that image acquisition time is directly related to the number of X-ray photons being generated in the tube, so to decrease the imaging time we need to increase the X-ray photon count. We also know that throughput is limited by exposure time, which means the single biggest knob we have to turn to increase throughput is decreasing exposure time.
But wait! If you increase the power in an X-ray tube, you risk damaging the X-ray target. In Part 2 of this series, we’ll discuss Micro X-Ray’s innovations in target power loading, and how we can take the highest resolution images faster than any other source on the market.
Stay tuned for more!

We’re always available to talk about X-rays, and help you weigh the tradeoffs and consider the various application constraints to pick the right source for you. Contact us today to learn more about our X-ray tube, source, and power supply offerings!

X-ray Sources 101: How to Choose a Target Material for XRF